The Favorite Sister by Jessica Knoll 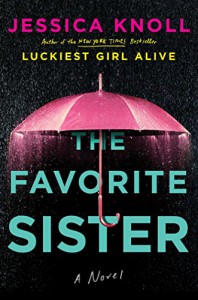 A special thank you to NetGalley and Simon & Schuster Canada for an ARC in exchange for an honest review.

Five strong, successful women make up the Goal Diggers reality show cast set in New York City. The producers will get more than they bargain for this season when one of the women is murdered.

Brett is the fan favourite. She is only 27 and has launched a highly successful spin studio. That, coupled with her recent engagement, has only increased her popularity and made her the envy of her cast since they are all vying for the spotlight.

Kelly is Brett's older sister, business partner, and the newest cast member. The veterans of the show think she's a cling-on not understanding that growing up, it was Kelly who was the favourite, not Brett.

Lauren a successful start-up story whose out-of-control drinking has her poised for a recovery storyline.

Finally Jen, rich and famous from her vegan food line is actually not vegan, and is incredibly ruthless behind the scenes. I pictured her to be like Gwyneth Paltrow chowing down on burgers.

Can I tell you how riveting this was? Knoll has an incredible knack for writing conversation which is why the premise worked so well—we are also a culture that is obsessed with celebrity and social media, and this story plays right into that hand.

There are multiple characters introduced in the beginning and I had to keep referring back to the character synopsis to keep them all straight and I really hope that this is included in the published book. Certainly not a criticism, but I wanted to mention it because I found it useful. Knoll develops intriguing and complex characters with several layers and once you get into the story, you easily can tell who is speaking and whose point of view it is.

The title of the book is clever—it speaks to the obvious sisters in the story as well as a nod to the sisterhood of women. It is these relationship dynamics that are present and integral to the narrative.  Knoll's view of the sister/sisterhood is multi-faceted and downright ruthless at times. But she's not wrong. Women are all about coming together and supporting one another however, the flip side is the incredible hypocrisy as women will turn on each other on a dime! Women have to be younger than their male counterparts, thinner, smarter, and so on and unfortunately, we are our worst critics both to ourselves and each other.  Knoll explores all of this through the lens of a reality show. I thought this was a fantastic read.